An Encounter With Two New Spirit Friends On "The Other Side"

Lately I’ve been wondering why Spirit would wish to speak to me.
So I decided to go to “the other side” to ask about this in a recent meditation. 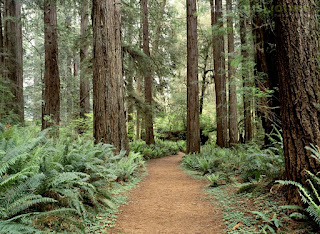 As I sank into a meditative state, I found myself deep in a forest. The leaves sparkled on on the trees that formed a canopy high above me. I was struck by the luminescence of the green vegetation surrounding me.
I waited, alone, wondering what might happen. I could hear only the sounds of birds and rustling leaves. The air smelled faintly of lilac, like a sweet mix of roses and vanilla, reminding me of my childhood during springtime in Pennsylvania. After a while, I began to think no one would show up.
Suddenly, two spirit beings appeared in my presence. One, seemingly male, stood to my left, the other, female, to my right.
“You thought you were all alone, didn’t you?” the male asked, smiling.
I could only nod, awestruck by the radiant beauty of these two translucent beings.
“That’s what you’ve always thought,” the female commented. “But you’re never alone.”
They emitted a love and gentleness like none I had ever before felt.
“Where’s Max?” I asked, somewhat dumbfounded and not knowing what else to say. I had grown accustomed to encountering Max, my primary spirit guide, during my journeys to “the other side.”

“He will join us later,” the male assured me. “He’s finishing up some other duties. He delegated this time to us. You see, Roy, we’re learning, too, just like you are. That’s why Max asked us to meet you.”
Hmm, I thought to myself, don’t spirit entities already know everything? They knew my thoughts and laughed. “We’re eternally evolving, just like you,” the female informed me. “Now, then,” she continued, “we know you have a question you’d like to ask.”
“Well, yes,” I said. “It’s simply this: Why does Spirit wish to communicate with me?”
The male placed a hand gently on my shoulder. “You have forgotten what you really are,” he said. “You believe you are separate from us. We want to help you remember what you have forgotten. We want to work with you. It’s our job.”
In my spiritual studies, I had heard words like these before. I had packed my head full of knowledge. But I wanted to know what Oneness felt like in my heart. Now I could feel their energy reaching out to me, enveloping me. I felt energized, exhilarated. I felt like I was glowing, just like my two new friends.
For a while, none of us spoke. Suddenly, I realized I didn’t know the names of these two glorious beings. Just as suddenly, I knew their names weren’t important. I knew that, in Spirit, we identify each other by vibration, not by names.
“Our evolution is closely tied to yours,” the male said. “When you make progress, so do we. We have a vested interest in your progress.”
“You thought we’ve been ignoring you,” the female interjected. “The fact is: we couldn’t get through to you. Now, at long last, you’re making it possible for us to communicate with you.”
The male continued, “We have much to tell you. But because of your self-imposed limitations, we have to do it little by little. You couldn’t absorb it all at once.”
This exasperated me. I wanted to know everything -- right now! I always do.
“Just walk. And listen,” the male said.
As we walked, I could hear birds singing in the tree tops. But it seemed as if all of naturing was singing, like a celestial choir. What a joyous sound! Within me, I could feel the stirrings of “divine knowing.”
At last, the female spoke. “We have been communicating with you for a long time -- in what you have been reading, in what others have been saying to you. We have put others in your path. You call them friends, but you could also call them teachers.”
In that moment, I knew that the physical world and spirit realms are not really separate, as I had always believed. I knew that there has always been a constant flow of communication between us in the physical world and those in the spirit realms, even though we have not been able to hear it. I knew that, like my two new spirit friends, I was a spiritual being, too.
It was difficult to tell from which of them this knowledge was coming, because neither one of them was speaking aloud. Instead, their thoughts were flowing into me. But it didn’t matter. Perhaps they had only taken on their two forms so that I could relate to them during our encounter in the forest.
Suddenly and to my surprise, Max appeared before me “out of nowhere” there in the forest. He chuckled at my surprise. “Have these two been answering your questions?” he asked me.
I assured him that they had.
“Well, don’t keep this wisdom to yourself,” he instructed. “It’s meant to be shared with others.”
I could sense at that moment that it was nearly time for me to go, but I didn’t want to. I wanted to stay with Max and my two new friends. We lingered there a while longer. I felt as if I was absorbing knowledge from them.
At last, I felt myself slipping away. I tried to stop the inevitable return to my physical body, but I could not.
“We are always here, waiting for you,” one of them said. Then they were gone. And I was back in my physical body.
Posted by resmith at 8:58 AM