How I Experienced Divine Grace During Meditation

For me, visualization meditation has become an essential spiritual practice.
Recently in such a meditation, I found myself standing on a hillside. Thousands of other souls stood there with me.
We were waiting, quietly, blissfully, in anticipation. 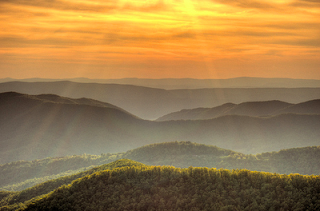 All of us were looking across a valley to the rolling hills beyond. We were watching what appeared to be a sunrise.
As I watched the sunrise, I began to hear the melodious sound of a heavenly choir, faintly at first and then louder. But I saw no choir. At once I realized this sound was, in fact, emanating from within the light bodies of the multitude of souls standing there on the hillside. What a joyous sound!
“So this is what joy sounds like!” I remember thinking to myself in amazement.
I then began to wonder what was going on. Why had we gathered here? What were we witnessing? Was this some sort of Biblical rapture? Was this the ascension? Would we be lifted up into the heavens?
I could see the “sunlight” glowing on the faces of those souls standing near me. I could feel its warmth on my own face. I had never before felt such deep humility and happiness as I did in that moment.
Then I realized it could not be a sunrise I was watching, because in Heaven there is no sun. Nor is there darkness of night. I continued to wait.
No one was speaking, but like the others, I began to experience a gentle “knowing.” Thoughts were coming into my head. I couldn’t be sure where these thoughts were coming from.
All at once, I knew we were observing the divine energy of God. I could feel this energy flowing into me in wave after joyous wave. It wasn’t blasting me -- it was just flowing into me like gentle waves on a beach. I could feel the heavy crust of my negative emotions -- fear, judgmentalism, and greed -- breaking apart and falling away. I was experiencing the grace of God. I was experiencing salvation from the false belief in separation from God. Freely and unconditionally, God was removing the illusions of physicality I had always believed were real.
“Thank you. Thank you, God,” I murmured.
My joy must have been greater than I imagined. Someone standing nearby glanced at me. I could hear his thoughts. “This is it!” he was thinking. “This is what we’ve been waiting such a long time for. Isn’t it wonderful?!”
I knew in that moment that a new Earth was coming. Heaven and Earth would soon be merging. Earth would be beautiful again, as pristine as it had once been. And to dwell in this new Earth, my physical body was being transformed into a light body. How I welcomed this event!
I could hear someone else thinking, “We’re home at last!”
I smiled in quiet gratitude.
And then I knew I could not remain in this beautiful place much longer. I had to return to the physical world. I still had work to do in the physical world. I still had a mission to complete.
As the scene on the hillside gradually faded, I struggled to remember what I had learned there. Ordinary thoughts of things I had to do throughout the day were seeping into my meditative state, pulling me back into the physical world. I could hear the intrusive sound of my meditation timer.
Now back in the physical world, I had many things to think about -- among them the energy and grace of God and how these were transforming me. I was glad to have spiritual friends here in the physical world to help me understand these things. I knew I would soon experience God’s grace again.
Posted by resmith at 2:56 PM