The Symptoms of Spiritual Ascension

Have you been experiencing any of these symptoms:
• A feeling of being lost in time and space?
• Medically-inexplicable aches and pains throughout your body?
• A loss of interest in the things you used to enjoy?
• A profound sadness for no apparent reason?
• Excessive confusion or chronic fatigue?
• A deep sense of urgency, as if time is running out?
• A longing to go Home where you belong? 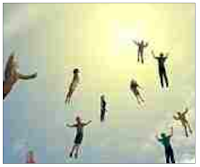 Ascension is a new age version of what Christians call "the rapture." In the biblical portrayal of the rapture, people will suddenly and surprisingly disappear right in front of us and be taken up to Heaven, while those of us left behind will endure unimaginable suffering. As a child in church, this prophecy terrified me. Preachers, evangelists, and other religious fanatics threatened in their loud, ranting voices that it could happen at any moment. As an adult, however, I have come to understand how the church uses fear to instill obedience in us. It is no wonder, then, that I would abandon the nonsensical religious idea of rapture in favor of the new age idea of ascension.

In effect, ascension is taking us to a higher level of consciousness. This process is also referred to as a shift in consciousness or spiritual awakening. The word "ascension" literally means to move upward. It will take us from the dense third dimension to the lighter fourth dimension and ultimately to the glorious fifth dimension.

Until now, we have had to undergo physical death in order to leave the physical world when it's time to return to the spirit realms. But long ago, we planned for ascension as a means to leave this lower dimension permanently behind. The question has always been "when"—not "if"—this would happen.

Our awareness of the process of spiritual ascension can be sparked by a life-altering event. This happened to me. As the result of a sudden and profound spiritual awakening in 1990, my life has changed in every way. Generally, I have lost interest in material, physical, and earthly matters. My life now focuses on spiritual growth. I have discovered that I don't have to wait until I get to "Heaven" to experience bliss, joy, and serenity. I have learned that I won't be left behind in the rapture despite the threats of the religious fanatics, because sooner or later, we will all ascend.

If you are concerned about the symptoms you are experiencing, consult a medical professional. But if it turns out that he or she can find nothing medically wrong with you, then you may be able to conclude that you are experiencing the symptoms of ascension. If the discomfort is too severe, ask your spirit guides to "tone it down a little." Know that resistance to ascension is a leading cause of the ascension symptoms. Know also that the symptoms are temporary and eventually will disappear as the ascension process continues. Hang out with like-minded spiritual friends who may be having the same symptoms you are. Continue with your spiritual studies and spiritual practices such as meditation. Learn as much as you can about the process of ascension and its affects on you, because our worst enemy is fear of the unknown.

Never before in history have we undergone the process of ascension, especially in such an intense and rapid way. We chose to be here at this time in order to experience it first hand. It is truly an amazing time to be alive.
Posted by resmith at 11:42 AM