How I Learned About My Job in Heaven

Today I did workbook lesson 199 of A Course in Miracles. This lesson says: “I am not a body. I am free.”
Inspired by the lesson, I decided to take it with me into meditation in order to discuss it with my spirit guide.
Little did I know what I would learn...
I entered a meditative state and at once found myself at the large wooden doors which, for me, separate the physical world from the spiritual realms. I pushed and the doors opened easily. Beyond, I entered a beautiful garden, where I have gone so many times before. I have become very fond of this place. For me, it is Heaven!
My spirit guide Max quietly appeared, approaching from my left. I smiled at him. 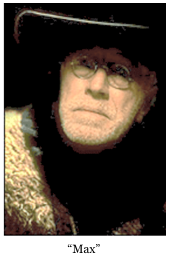 I'm always happy to see Max. I recall the first time I met him. At that first meeting, he looked just like the Swedish actor Max von Sydow, who played the role of "the tracker" in the movie What Dreams May Come. I decided to call him "Max" from that moment on.

As he often does, Max said, “Let’s walk for a while.” Max seems to enjoy our walks in the garden as much as I do.
“I just did ACIM lesson 199,” I told him. “It reminds me that a physical body is not what I am.”

He laughed. He seemed to know my thoughts. “Look at yourself,” he said. “You most certainly are not a physical body.”
I glanced down at myself. I did not see a physical body. Instead, I saw myself  as a light body. I have often seen myself as a being of light when I travel beyond the veil in meditation.
“Isn’t it wonderful!” Max exclaimed.
“Oh, yes!” I responded joyously. As always, it felt so peaceful to be here.
“Why do you think you took on a physical body in the first place?” he asked.
“That’s easy,” I responded. “I needed a physical body to get around in the physical world.”
“True,” he agreed. “But there’s much more to it than that. Come. I want you to meet some friends.”
We continued to follow the garden path in this place of exquisite colors, smells and sounds.
Then we came upon a garden pool of sparking clear water. There we encountered a small group of light beings, sitting on a low stone wall at the water’s edge. They looked up at us, smiling as we approached. They had been waiting for us there.
Max said to me, “Our friends here will soon incarnate for the first time. They want to know from you what to expect.”
I remember some of what I said to them. I told them they were in for a challenging experience -- some more than others, depending on their life plan, what they hoped to learn and accomplish during their upcoming physical incarnation, and how much they wished to accelerate their spiritual growth.
They listened eagerly. I wondered how they could not have already known these things.
Max stood off to one side listening, neither approving nor disapproving of my words.
“The physical world is very sensual. You’re in for a real adventure,” I told them.
I was happy to be with them. My confidence grew as I continued to describe to them my experience in the physical world. I glanced at Max again, remembering how on a previous occasion he also stood at my side when I addressed a large assembly of souls who wanted to know all about life in the physical world. That large assembly of souls had come to listen to me speak in what appeared to be a very tall, crystal cathedral. I remember how I had been infused with confidence for the first time while speaking to that assembly.
But the small group I was talking to now seemed especially eager to learn more.
As I spoke to them, I experienced a sudden and spontaneous epiphany: It was my “job” here in the spiritual realms to help young souls prepare for physical incarnation! Max knew my thoughts and nodded. This discovery filled me with bliss.
After a while, Max suggested we move on.
We came to a bench under the canopy of a large tree along the garden path. Max suggested we sit for a while. Water in the garden fountains before us danced like crystals. The luminous plants around us emitted soft sounds reminding me of an angelic choir.
As we sat there, Max turned to me and said, “You will become a teacher here. You will teach in a school for souls who are preparing to incarnate.”
This prospect sounded daunting to me. I wondered if I was right for that kind of job, because I had always believed that the physical world was a place where we learned our spiritual lessons through pain and suffering. I had often described “Earth school” as a difficult place to come to. I had only recently begun to learn that life in the physical world was supposed to be a joyous, creative experience.
Max assured me that I could do it.
“When can I see this school?” I asked him.
“You’ve been there many times,” he responded. “In fact, you were there not long ago.”
Then I remembered: I had indeed gone to such a place recently in meditation. At first, I thought what I saw during that meditation was a monastery perched on the slopes of a mountain, but it turned out to be a spiritual school with breath-taking views of the alpine valley below.
“Many will come to learn from you,” Max informed me.
I had just learned of my function here in the spiritual realms! Now I was overcome by feelings of contentment. I wondered how this discovery of my purpose here in the spiritual realms might relate to my purpose in the physical world.
Max smiled. “You’re already doing it,” he said.
I understood what he meant: I needed to experience the physical world myself before I could teach others in the spiritual realms about it.
Then I heard my meditation chimes gently ringing. It was time to return to the physical world. Only 20 minutes of physical time had passed, but it seemed much longer. Reluctantly, I said farewell to Max and this beautiful place.
Now back in the physical world, I reflected on what I had learned during this meditation. In my head I could hear Max say, “Many are now listening. Tell them what you are learning.”
Posted by resmith at 8:39 AM